The Juan Bautista De Anza National Historical Trail runs from the U.S./Mexico border in Arizona into Southern California and up the west side of the state to San Francisco. A four-mile section has been preserved as a hiking/biking/equestrian trail on the outskirts of San Juan Bautista, leading up and over the divide between San Benito County and Monterey County. For the better part of sixteen years, that has been my regular hiking trail. From my camp at the Mission Farm, it's about eight and a half miles round trip to the divide and back. Sometimes I do all of the trail, making an even ten-mile walk, sometimes I turn around at the divide, and sometimes I stop at the "second bench" and return, which gives me a five-mile walk.

During the pandemic, I have curtailed my walks on the De Anza Trail due to an increase in foot and bike traffic, electing to do a set of five-mile daily walks mostly on back roads in an effort to social distance and to stay safe and sane. Yesterday, though, I felt like a longer walk in the sunshine so I did my eight and a half mile route from home up to the crest and back. I found that in this interim period of a year or so, the trail has degraded due to disrespect, ignorance, and anarchy. Maybe these things are one and the same.

When I got close to the trailhead where all the cars were parked (at least twenty, maybe more), I saw broken window glass littering the gravel road and new "Neighborhood Watch" signs telling you to call the police and report suspicious behavior (San Juan Bautista doesn't even have a police department - at any one time, there are three deputy sheriffs patrolling the whole durn county). Half the cars were parked in the area specifically set aside for emergency vehicles only.

Moments later, I was hiking up the beginning of the steepish grade that forms the first mile or so of the trail. Looking up, I saw four mountain bikers barreling downhill on the wide trail, so I immediately shifted over to the side that was rockier, giving them a smoother descent. I was masked. They were not. They weren't even wearing helmets. I waved. They didn't look at me or acknowledge my friendly, considerate behavior. I shook my head, mumbled "you're welcome" under my breath, and moved on.

Shortly thereafter, I came upon the first of several rock stacks or cairns next to the trail. This is some sort of stupid fad that has been going on for a few years. I understand piles of horseshit  and some coyote scat here and there. I do not understand why humans stack rocks. It is not natural and it takes away from any sort of wilderness or urban wilderness experience on a hike. To me, it's like taking a dump next to the trail and walking away. Look, everybody, I took a dump! Do that in your backyard if you just have to follow a fad.

Soon I began to encounter the hikers who came to the trail in all those mis-parked SUVs. I immediately pulled up my mask as soon as I got within thirty feet of them (when you are breathing hard, your aerosols can travel thirty feet or more if you are unmasked). Most of these hikers were in groups, clumped close together, not wearing masks, spewing whatever junk was in their systems right at me, grinning and gabbing, some looking at their phones, pretty much ignoring where they were, all wrapped up in themselves. I waved and said hello, like I always do, even though I wanted to scream at them. Very few responded. This went on the whole time I was on the trail, although I learned to pick up my pace or scramble away when I needed to evade them.

A little over a mile up the trail, the grade evens out a little bit and there is a shady, inviting sort of natural amphitheater in the rocks off to the side. Until a few years ago, this was a welcome rest stop for some of the older hikers, especially in the summer, a good place to snack and take a break if you were in the mood. That's not something I generally do on a short hike, but I get the appeal of the spot. Now though, it is the site of a fake little town. Somebody started it around 2017. They made these cutesy fake model houses a little bigger than a rat and scattered them here and there among the rocks, approximating a town. Why would I or anybody else leave town to hike up a trail to see a town? Since all this nonsense began, more crap has been added. Wind chimes. Tinsel and other junk hanging in trees. New age, fake-ass, bruja stick bundles. Rock stacks. It's disgusting. Clumps of maskless, fat hikers with expensive cameras stop and poke around the mess, taking pictures and ignoring the trees and sky and Earth around them. It is all I can do to stop myself from destroying the entire thing.

I climbed past all of it and turned around, encountering the inevitable fat maskless question over and over again from people on the way up: "how much farther is it?" How I wanted to explain that they, right then and there, were the only place they could possibly be. That there is no "it" to get to. That each and every moment and footstep is the reality of a hike and they were breaking all the fundamentals of hiking truth, happiness, and holiness by their disrespect, ignorance, and anarchy.

Passing by the the little fake town on the way down, I once again saw the mountain bikers on their return trip to the Monterey County side. They were still unmasked, still clumped together, still unfriendly, refusing to acknowledge another human's presence. They were snapping Nikon photos of the houses and each other as loud music blasted from the leader's speaker mounted on his three thousand dollar e-bike. Hell has come to the De Anza Trail.

Disrespect, ignorance, anarchy. It's time for me to move on. 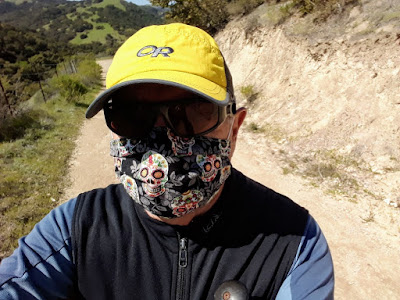 Sometimes, to get ahead you have to take a step back.

That's what I did yesterday on a hike up the hill to St. Francis Retreat and back. Between the bothersome dental episode, the earwax excavation drama, and my first COVID shot, I have been feeling less than stellar for a month or so - not really sick or anything, just kind of slow. I got the first Moderna dose on March 2 and didn't feel any ill effects for about the first 36 hours. Then I got woozy, sleepy, and achy for less than a day, then I rebounded briefly before getting pokey again, with night sweats and some really foggy brain drain.

Through all of it, I kept up my walks and substituted yard work and highway cleanups for the bike rides (a little wary of my balance). Often I would have to stop for a half a minute to just breathe and be still. That, of course, is not an unpleasant thing to do, but I wondered on and off how I might be perceived by a casual onlooker - oh look, there's an old man all wrapped up in dementia!

Yesterday, I woke up bright-eyed and bushy-tailed. I hadn't sweat at all overnight and I was refreshingly clear-headed. So after breakfast, I set off for a six-mile walk up to St. Francis Retreat and back to test my new clarity. It was awesome! I didn't stop and stare once! I think I'm back! 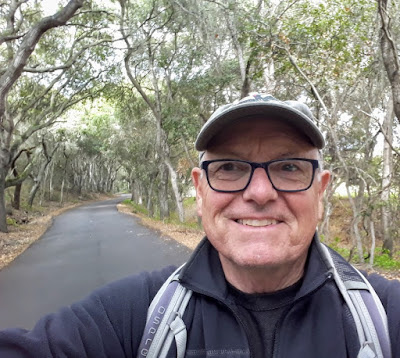 The sky was in transition between the storms of the past two days and whatever is going to happen next and my most favorite tree in the world was hanging out to greet me on the way up. 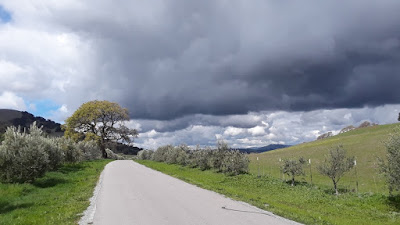 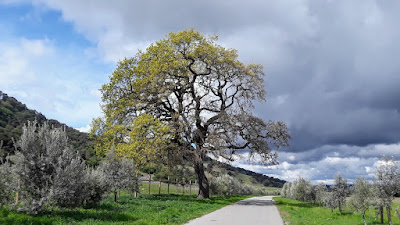 I can't explain it, but that big, graceful oak never fails to fill my heart with love. Is it more early onset dementia or am I really in love with a tree? The view from the other side, with different lighting on the way home is just as inspiring to me. Your mileage may vary. 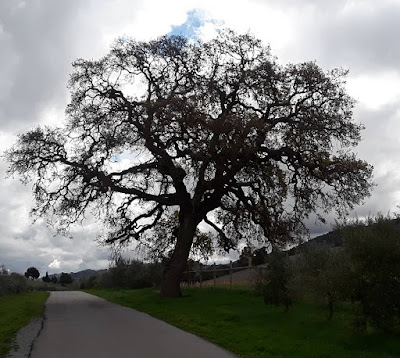 Up at the Retreat, there is a gorgeous gazebo that features wide open views of the valleys and mountains, but yesterday, I was focused on the burly sky and clouds. 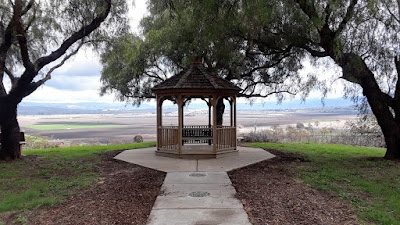 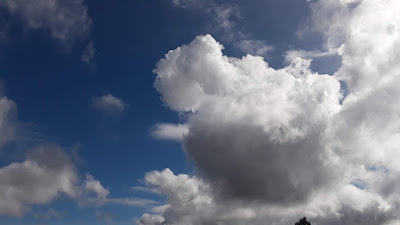 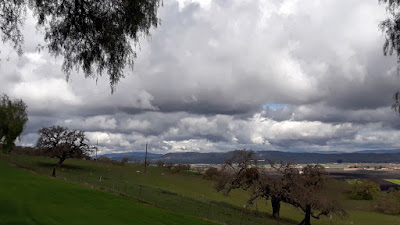 After a quick tour of the grounds and the stations of the cross, I headed home through the comforting tree tunnel back to my cozy camp. I was feeling whole and balanced. It took a positive retreat to make some forward progress. 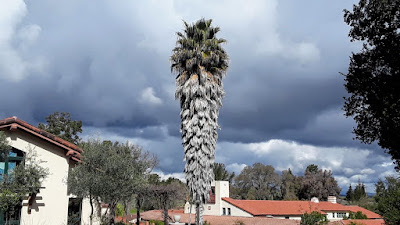 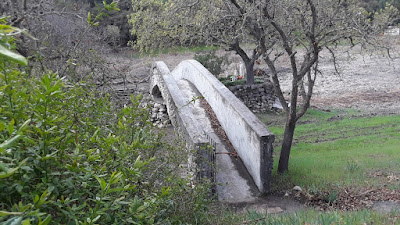 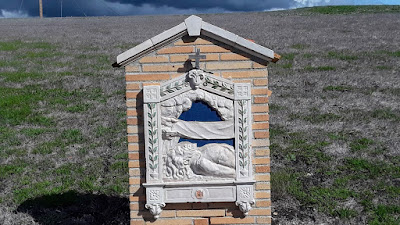 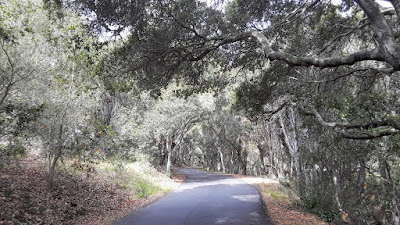 Peace, Love, and What Will Shot Two Have in Store?
Jim
Posted by Palomino at 8:51 AM No comments: