Fifty-six years ago today Alfred Hitchcock released The Birds, which, along with Psycho, permanently scarred the fragile, developing medullas of an entire generation. It wasn't Elvis or Little Richard or Dylan or Kesey or the Beatles or Hendrix or Joplin that screwed everybody up. It was Alfred Freakin' Hitchcock. 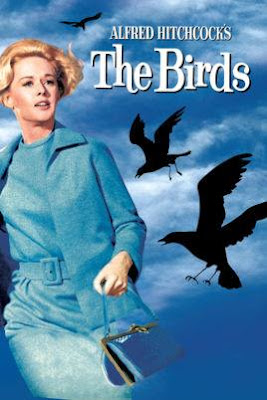 Filmed mostly in Bodega Bay, just 130 miles up the coast from here, The Birds starred Tippi Hedren and Rod Taylor, with a minor appearance by a very young Suzanne Pleshette. Pleshette was so addled by her role in the movie that she spent several tri-polar years married to TV psychologist Bob Newhart. Thank God. What a great show. Every single character was certifiably cuckoo.

So what did I do to celebrate my personal, cracked-up-cortex anniversary? I went to the beach, of course, knowing full well there would be no telephone booths to hide in, that every church in a fifty mile radius would be locked up tight, that every school would be fenced and gated and patrolled by an armed resource officer, and that every place of business would charge me top dollar to hide behind their counter. My only refuge would be Spugly the Spectacularly Ugly Palomino Transporter, which already has a couple of cracks in its windshield, and a pair of wobbly, stinkin' green port-a-potties on the edge of the parking lot, which is separated from the beach by a steep line of sand dunes. Sheesh.

Okay, not to bore you, I'll cut right to the chase. Nothing bad happened. I walked a little over six miles in the sand and I saw all kinds of beach and sea birds, especially at the mouth of the Pajaro River near Zmudowski Beach. Pajaro, of course, means "bird" en Espanol. It was the opposite of scary as hell. It was heavenly. I loved it.

I saw snowy plovers, black flying cormorants, gulls, sulking red-faced turkey vultures, nervous curlews and sandpipers, but nary a pelican, not a solitary one. I saw a single bobbing sea otter and a bunch of fat, lazy harbor seals napping on a spit in the harbor. I only saw a handful of other, non-scared humans. All together it was a great, fun day. 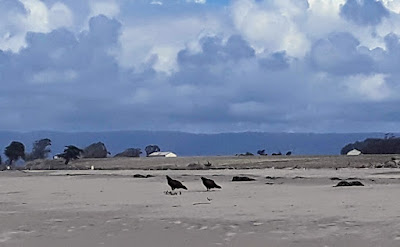 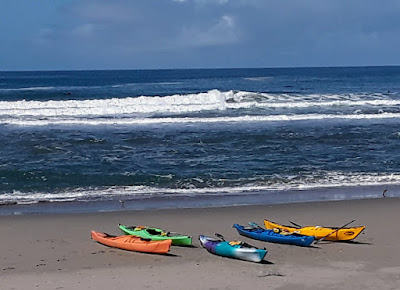 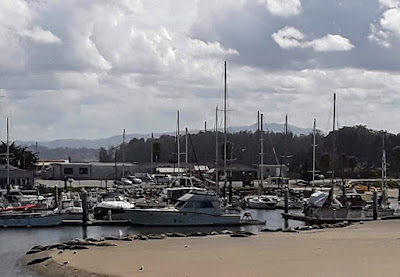 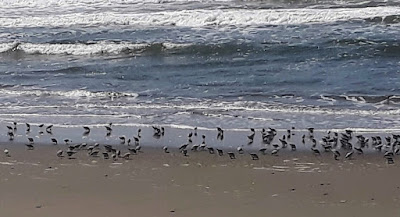 Probably, it is better that no birds gang-pecked me or chased me over the dunes into the potty. Maybe after fifty-six years the generational curse is over and The Birds is merely another classic scary movie. Maybe. I hope so. At this point, I can't outrun a sea turtle much less a flock of crazed sea birds.

Ever since I came back from Arizona, there has been one cold rain event after another. Until this week, that is. El Sol came out on Tuesday and stayed gently brilliant every day, old school style, the OG  blazing his casual self from morning to night. How could anyone not be in a happy mood?

Then a quick stop at Palisades Park in Pismo Beach. Couldn't resist.

In Santa Barbara, I joined Craig and Don and their dogs Myra and Ozzie for a sunset walk on East Beach. The lighting was simply holy.

Next morning was breakfast at Esau's Cafe in Carpenteria. Esau's used to be on State Street in Santa Barbara, but I guess the rent got too expensive. The cool vibe is just the same in Carp and so is the food - yum. A quick walk on the World's Safest Beach aided digestion.

I wanted to go up to Figueroa Mountain to see if there might be a wildflower bloom happening. It was too early for a major splash, but it didn't matter. The scenery was great and the air was magnificent. It didn't hurt that I got to ride in Craig's 1990's gimme-a- ticket-red Porsche Boxster convertible up and back. A racy go cart for grown-ups.
The Sun did not disappoint the next morning in SB, lighting up the Dolphin statues by Stearn's Wharf after breakfast at the Breakwater Cafe.

Then it was back up the 101 to San Luis Obispo to check out some new-to-me parks and museums downtown.

Cayucos on Highway 1 is one of my favorite beach towns ever. Will it continue to survive with its sea charm and laid back surf demeanor or will the monsters of development consume it, too?

The Big Sur coast from Ragged Point to Carmel is magnificent, the jewel of North America. I have bicycled it three times and I have driven it too many times to count, but it never gets old, particularly when the weather is as perfect as this. I always get a fried egg sandwich at the grill in Ragged Point. Always. It is still $4.95 and as awesome as ever after all these years.


I stopped at all my little favorite turnouts and reminisced about bike journeys both with different folks and solo. I am confident that this is one place that will outlive all the crazy. God rules here.

Posted by Palomino at 5:32 PM No comments:

I watched Free Solo commercial-free on the National Geographic channel tonight. Let me preface the fact that I loved it by saying that my stomach churned constantly and I ground my teeth the whole way through. Okay, I loved it. 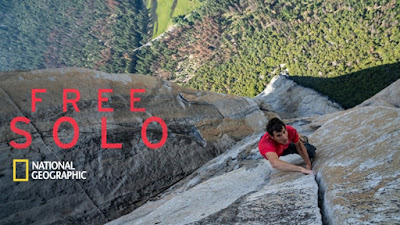 Free Solo recently won an Oscar for the most ferociously bone-chilling, death-defying, Samurai-warrior-climbing-El Capitan-without-a-rope-on-a-June-day-in-just-under-four-hours-with-a-film-crew-all-set-to-hurl-and-cry documentary ever conceived and executed. God almighty, this thing is fiery intense! 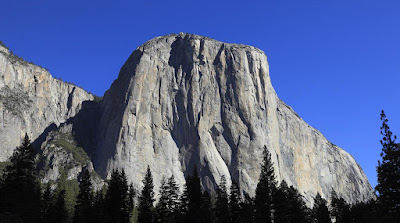 El Capitan, if you don't know, is a three thousand feet tall gorgeous granite vertical wall in Yosemite National Park. Other climbers have scaled it using ropes and all the climbing gear "normally" used for such endeavors. Only Alex Honnald has free-climbed it all by his lonesome. 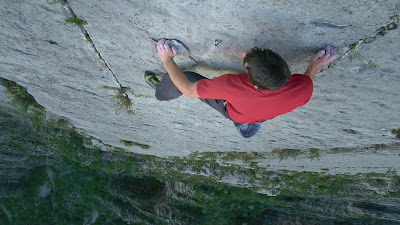 Is he crazy? A genius? Superman? My guess is all three. Seriously, this is the single most impressive athletic accomplishment I have ever seen. His strength is one thing. His endurance is another. His focus/presence/relaxed intensity is alien, from the spirit realm. 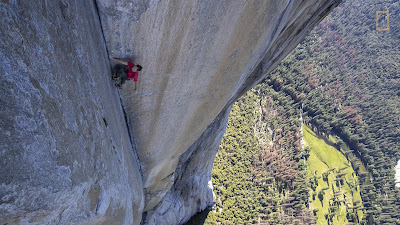 You know at the beginning and throughout the whole film that he is going to make it, that he is not going to fall, but does that make any difference? No. You still are a bundle of nerves. Sweaty hands. Butterflies. Shortness of breath. Muttering omg's and other colorful stuff. The film crew, climbers all, can barely even watch and I promise you that you will look away at least once, if not several times. You might even puke all over your shirt. Keep a towel handy just in case.

At the end, on top of El Cap, after he finishes, what does he have to say? Of all the things you can think of that he might say, what does he say? I won't spoil it for you. 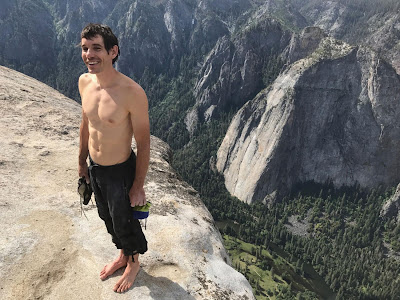 Posted by Palomino at 9:04 PM No comments: