Last night I led a sunset/moonrise hike on the Juan Bautista De Anza Trail a few miles from my camp on the outskirts of San Juan Bautista. The hike was co-sponsored by BenitoLink and the REACH San Benito Parks Foundation. It was yet another effort by these organizations to promote community health through outdoor recreation and public education.

I hiked up to a spot on the trail that had a natural windbreak and an overlook of San Juan Valley while participants arrived at the trail head below and registered with REACH staff. After the Sun was all the way down and the Moon was all the way up, this view was absolutely enchanting.

When I agreed to do this event, I figured maybe twenty-five people would show up. By the time Saturday arrived, more than two hundred folks had registered on the REACH web site! Less than a hundred actually showed up, but it was still quite a turnout. I was so happy to see many young parents and their kids.

I fed off the kids' energy and used them as props in demonstrating the relative movements of the Earth, Sun, and Moon. They were smart and engaged and willing. Even the littlest ones knew that the Sun is a star and the Moon reflects the light of the Sun. With some coaching, they acted out the Moon's synchronous orbit around Earth, showing why we only see one lunar side, and how the lunar phases change every 29-ish days. They were great!

Even though I was a little rusty after five years of active, but quiet retirement, I think my explanations of how the Moon formed and how the lunar phases work came across pretty well. I did the presentation twice for two pods of hikers as they shuffled up the rather steep mile and a half section of the trail.

One of the things I mentioned to the hikers is my personal pet lunar peeve. What's that, you ask? Well, here it is: there are more than 160 moons (and counting) in our solar system. We have blessed them with some very interesting names, like Io, Ganymede, Hyperion, Miranda, Tethys, and Titan. Yet, we persist in calling our moon "The Moon." This is either grossly unimaginative or hugely egotistical on our part, don't you think?

I mentioned my peeve to everyone present before the hikers began to walk back down the by then magically illuminated trail. I encouraged them to come up with a new name for the Moon and email it to me as soon as possible. Almost immediately, a bright and shining eight-year-old girl had an idea. She wants to call the Moon "La Princessa." Think that one over, Disney fans! A distinguished panel of former science teachers from San Benito County, California will sift through responses and make a decision for the rest of the planet. An announcement will be made by summer solstice, 2018.

If readers of this blog would also like to participate, please send me your best names for The Moon as soon as possible. Send them here: jim.ostdick@gmail.com . 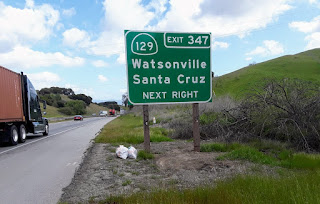 Yesterday was not the first day I have found an adult sex toy on the side of the road. In fact, if the truth be told, over the ten years I have been picking up trash as an Adopt-a-Highway volunteer, I have probably found more than twenty such rude objects poking up out of the grass. And on my 2016 walk across America, you ask? Probably twenty more.

Yes, commuters, like it or not, driving amongst you on your potholed American highways are some rather odd and lonesome motorists. Indeed, some of your fellow citizens are busy pleasuring (punishing?) themselves or their chums with a wide variety of multi-colored plastic organs, then casting them aside, out the window, into the grass. Petroleum bi-products gone wild.

Yesterday's roadside surprise, however, was unique, at least in my experience. Not unique in a happy, shiny, unicorn sense. Unique as in a my-Lord-I-have-seen-it-all-now sort of way.

This particular tossed-aside adult sex toy was purple and kind of see-through. Big deal,  I have seen several of those before. It was enormous, shockingly long and thick, but a lot of them fit that description. It had batteries inside and some sort of knob or switch at the base...a vibrating mechanism of sorts...nope, not unique at all.

It was weird to have something moving around in there. I felt like a Texas snake-wrangler with a sack full of ornery rattlers. I figured that sooner or later, though, the batteries would run down. No government issued personal protection gloves known to mankind were going to give me the false courage to reach in there and turn it off. I prayed it would be dead before the dudes in the Caltrans truck come by to pick up the bags today. They see enough of this stuff. They don't need to see any more.

While the atmospheric-river/pineapple-express warm torrents of rain pummeled my humble camp again this week, I have passed the down time plowing through a neglected stack of books next to my reading chair. Larry McMurtry's Walter Benjamin at the Dairy Queen and The Son by Phillip Meyer are great "reads" as they say by two amazing storytellers. Give them a try if you have not already done so.

But personally, I got even more joy and fuel for introspection from two books by one of my all-time heroes, perhaps my favorite living hero, Kareem Abdul-Jabbar. First I read Becoming Kareem: Growing Up On and Off the Court. I followed it with Coach Wooden and Me: Our 50-Year Friendship On and Off the Court. 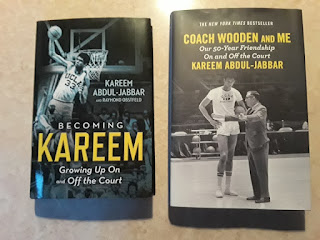 I am not sure it matters what order you choose, but I loved both accounts of the parts of Kareem's life which he decided to share with us. I am five years younger than he is. When I was in 8th grade and just discovering that I could be a pretty decent basketball player at the local level, Kareem, then Lew Alcindor, had finished up his high school career at Power Memorial High School in Manhattan. His teams went 90-2 there and UCLA, having just won two consecutive Final Fours under Coach John Wooden, was fortunate enough to acquire Lew's services for the next four years.

My first three years of high school corresponded with his three years of varsity dominance with the Bruins, where he went 88-2, won three Final Fours and three Final Four MVP's, and solidified his position to enter the NBA, where he continued to build perhaps the most stellar basketball resume ever. Only the great Bill Russell's overall career can arguably compare with Kareem's. And, oh yeah, Kareem also graduated with a degree in history from UCLA with highest honors.

To say that I was inspired by his accomplishments on the court is a severe understatement. But as time went by, from the late 1960s through the 1980s and into the 21st century, Kareem Abdul-Jabbar's public life and moral commitments off the court have served as measuring sticks, guides, and examples that I have tried my best to live up to as well.

Kareem is so much more than a 7'2" basketball legend. He is a teacher and a coach and a historian, a scholar, a thinker, an author, an advocate, a spokesman, and an icon, a son, a father, a teammate, a citizen, and an ambassador. And as you will see if you read these books, he is a deeply devoted, loving, intelligent human who will warm your soul, challenge your expectations and conceptions, and make you a better person, too.

Peace, Love, and Blessings to the Greatest of All Time,
Jim