Most of the time on these pages I just play around with my preoccupation with true love, i.e. the freeing concept of being in tune with, in concert with, in love with the natural world. At the root of this true love is science, the connective link between what makes up my being and what makes up all else, going backwards through birth, conception, ancestry, the formation of planets, star cycles, the expanding universe, to the Big Bang, creation. And going forward to living this life, death, decomposition, rejoining the processes and cycles of the portion of reality we can reasonably understand and measure. This true love keeps me, for the most part, locked into the present tense and happily aware of/protective of my surroundings and fellow creatures.

I allow for the possibility, if not the probability, that there is more to the picture than meets the eye or the electron microscope or the Hubble Space Telescope. Simply put, in my experience, there is a lot of stuff that I don't understand and I cannot explain. I choose to love it anyway to the extent that I am able. All of it, every bit of it, is real, even if I don't understand it. The part that I do understand places that other stuff in context. Usually.

Some days, though, it becomes crystal clear that there are lots of people who just don't get the connectivity thing. They seem to think that they live in a bubble separate from the natural world. They see everything in terms of themselves, their boundaries, their possessions, and their unnatural fantasy, fighting Everything Else. From this stunted viewpoint erupts racism, hatred, war, sexism, bigotry, discrimination, economic injustice, and systemic misery. This nonsense happens despite the warnings and teachings from all of history's prophets and philosophers that the imagined bubble is evil, unnatural, immoral, self-defeating, and dumb.

I believe it is important to call b.s. on this evil, unnatural, immoral, self-defeating, and dumb outlook. Last night I saw a "meme" (I will call it "This House") posted on Facebook by one of my favorite local citizens, a young mother and wife in a family closely in tune with nature. To me, "This House" represents true love with respect to human beings. It struck me as right and freeing in juxtaposition with the unhinged images of murder and suffering I watched last night on my television.

Mr. George Floyd was killed by someone who most likely would never approve of "This House." 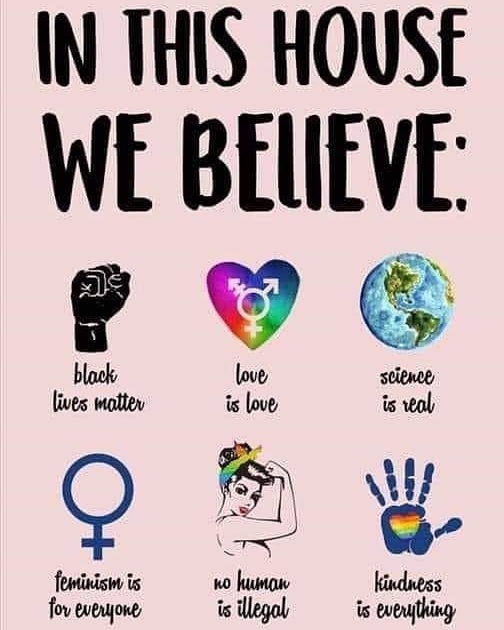 I'll break it down, briefly, as I see it.

A defender of the killer would most likely reply to the phrase "Black Lives Matter" with something like "All Lives Matter," thereby whitewashing the issue of real suffering, oppression, and death on the part of Black Americans for centuries at the hands of (mostly white) authorities. Of course everybody matters! Duh! But not everybody gets murdered by rogue cops in broad daylight. Frequently, Black Americans (men in particular) do.

A defender of the killer would most likely be offended by the phrase "Love is Love," which is associated with the LGBTQA+ community. You don't have to be lesbian or gay or bi or trans or queer or ace or anywhere in the range of these gender identities to understand that human beings are not all the same and that everyone deserves love, respect, and equal opportunities for happiness. I, clearly, am getting old. I didn't grow up with any of the knowledge about gender identity and sexuality that is available today. I learned most of what I know from following the lives of some of my most honest and dedicated students, ranging in age from 19 to 46. In recent years, many, I mean MANY of them have publicly and proudly identified as being somewhere in that spectrum. I loved them before that and I love them even more now. They have more courage than any of the bad cops (four on one) who pinned that handcuffed man to the ground, collapsed his lungs, and blocked his trachea until he suffocated.

A defender of the killer most likely has a selective interpretation of the phrase "Science is Real." As long as the technology that stems from scientific research keeps providing better and better toys to play with inside his or her bubble, science is cool. Star Trek? Way cool. But the anti-intellectual rally cries against public education, climate science, and public health policy belie their destructive ignore-ance and selfishness. Not to mention basic dishonesty.

Feminism Is for Everyone

A defender of the killer most likely is a fan of old school patriarchy and misogyny. What is feminism if not the advocacy of equality and freedom of choice for all? Either you believe in equality and freedom or you don't. If you don't, you live inside your bubble with a false sense of authority and privilege and you talk out of both sides of your mouth about patriotism, duty, and the Constitution. Your life is a sham and you are a fool.

No Human Is Illegal

A defender of the killer most likely thinks real history began in 1776. Where I live, the ancestors of most of my neighbors were here long before arbitrary state and national border lines were drawn. Lots (most) of those ancestors were murdered or enslaved or poisoned with pathogens. There was no equality then and there still isn't. Now so-called "illegals" bust their humps every day to grow the food everybody eats to survive. They live among us but they are treated like strangers by most and criminals by many. There is no coherent governmental policy to address their needs or those of their children. Their choices often come down to field work, deportation, or prison. To these human beings, it must seem that all of America lives in a bubble.

A defender of the killer acts tough and talks rough - as though doing otherwise is a sign of weakness -  like they know deep down that their bubble could and will collapse any minute. Kindness is not weakness. Kindness is an instinctive human reaction to discovering true love for the natural world - to living in peace within "This House."

I believe that all those flimsy, temporary bubbles will burst or at least float away into the cosmos if enough folks in "This House" stand up and be counted. Truth is strong. True love wins.

Peace, Love, and Connection,
Jim
Posted by Palomino at 11:07 AM No comments:

San Juan Bautista in San Benito County, CA, where I currently reside, began Phase 2 of the Grand Re-Opening this week. Restaurants have welcomed people inside for the first time since March (with restrictions) and so have the art and antique shops. Being of THAT AGE in a high risk demographic, I am still lying low, emerging masked from my camp only to exercise, get groceries, do laundry, and snag takeout once in a while. Fortunately, the weather has been pretty doggone nice for the most part. Some really awesome clouds have passed by lately - biggo cloud days are my favorite. 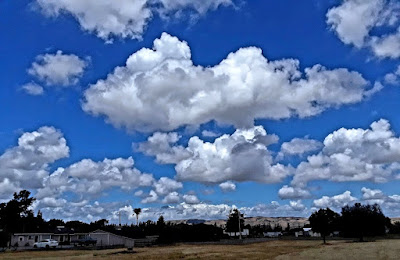 The County qualified for free COVID-19 testing recently. I tested negative for the virus on May 10 as expected and I would like to keep it that way. So I was pretty alarmed when I walked into town Saturday to find the usual motorcycle clubs and Mission tourists bouncing around without masks as if nothing ever happened. Apparently, for some people, ninety-some-thousand dead folks don't amount to much. I am generally an optimist, but it is hard to imagine how this virus will not do more damage if people slack off for the sake of a few beers.

To assist the small businesses, a program called Great Plates was initiated here using money from the state allotment of the CARES Act. The program pays the restaurant to prepare and deliver meals to seniors who qualify based on income. Here is where being dirt poor and old as dirt combine to create good times. Last night I received an amazing meal ("contactless delivery") from a restaurant in Tres Pinos (~15 miles from here) free of charge (to me) just because I am otherwise (except for my Adopt-a-Highway work) a fairly worthless citizen. The biz got paid and I got fed - win win! That is better than a stimulus check if you ask me. The owner dropped off the food in person and you could tell how happy it was making him to stay solvent and to help people, too. The food was great and I did not miss my beans and rice last night at all.

The 2020 in 2020 Challenge is in full bloom. I will edge past the 800-mile mark tomorrow, feeling healthy and strong. One of the coolest things I have kept track of on my walks is the progress of the Coke Farm organic artichoke field across the road from my camp. This week, it exploded with 'chokes and the harvest is on! 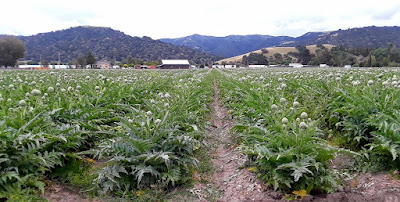 I have also made friends with a palomino on a nearby ranch - not a real talkative horse - mostly into eating grass and getting scratched behind the ears. I can relate. 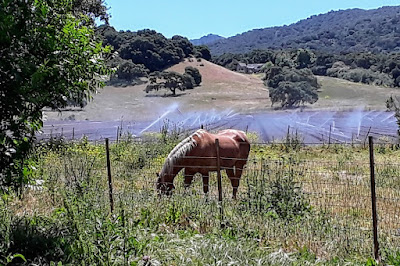 The four mile section of the Juan Bautista de Anza National Historic Trail that starts about a mile away from here provides a consistently challenging climb for me a few times a week. Sometimes I do the whole trail (8 miles round trip), but mostly I climb to the crest (2.7 miles) and back to my truck to get in my cardio. I have made friends there, too, mostly with blooming and decaying trees. The buckeyes are going crazy right now. And I'm always on the lookout for unusual shapes and expressive tree forms - it's a cheap hobby. 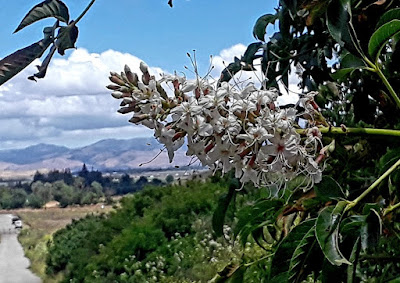 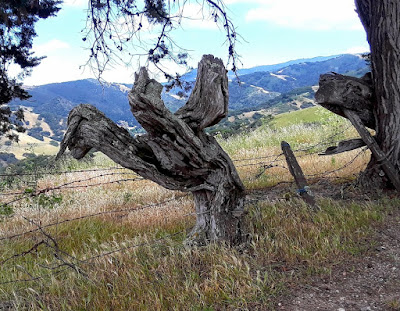 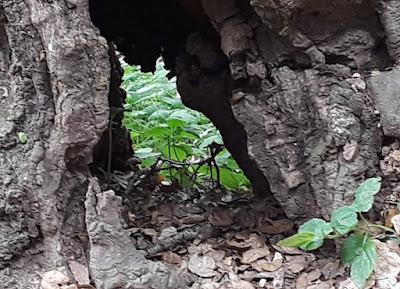 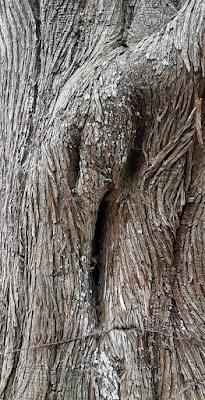 Most of the time, though, when I start to gain some elevation, I have my eyes on the long views. When the wind is blowing and I'm breathing hard, sweating like a workhorse, I get a thrill from taking a minute just to stand and stare. This land is my land, coast to coast, border to border, rain or shine. I belong to it, on it, and with it. 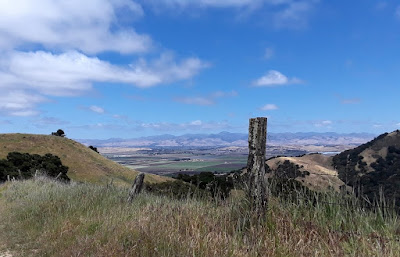 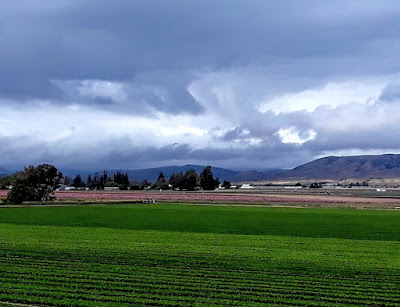 Peace, Love, and the Best of Health,
Jim