I am just barely in Oregon this evening, freshly showered and moquito-bitten at the deserted Stateline RV Park on the outskirts of Merrill  OR.

There are no other campers, just a bunch of empty old trailers infrequented by a local duck hunting group. Randy the caretaker is a nice enough guy. He was kind enough to give me a couple of liters of bottled water after he admitted that nobody drinks the well water. I can filter the stuff that comes out of the hand pump if I need more tonight. 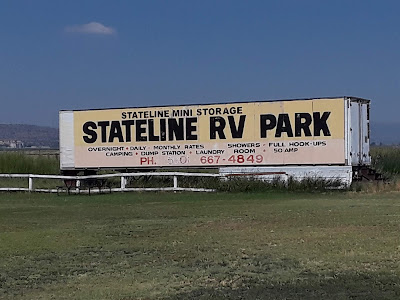 Guess what. Riding the train in a coach seat all night is poor preparation for pedaling a bicycle for a couple of hours. I dozed off here and there, but I was not at all ready to go when I stepped off in Klamath Falls.

I'm going to blame someone right here right now for my lack of shuteye. I don't know her name, but she got on in Sacramento about midnight. She has really bad aim when trying to plop her booty into a coach seat on a rocking  choo-choo. Let's just call her She Missed.

Okay, She Missed is old and it was late, but imagine my surprise when this old, sleepy, off-balance biddy careened onto my at-rest thigh which was, of course, attached to the rest of me and carefully occupying its assigned lower level window coach seat.

I didn't panic - mostly because the business end of her walking stick was about three inches from my eyeball. I still have pretty quick hands, even at my advanced age, and I fended off disaster instantaneously with sort of a controlled karate chop. I didn't knock it away from her, I just covered it and moved it a safe distance back from my eye.

I like that eye. In the future, I may don appropriate Personal Protective Equipment whenever attempting to snooze on the railroad.

She Missed was not even sorry, maybe because I sort of sarcastically said, "You missed," as this was all going down. She said nothing so I elaborated, "You missed your spot." That got her a little worked up and she snapped, "I am in my seat." As if having one whole buttock atop my innocent little thigh was perfectly good aim.

Then I don't know what happened exactly but after a minute she got up, fussed with some luggage, and tottered off to the back of the section, presumably to sit on somebody else's limbs. She Missed was not a bad person. She just never mastered the important skill of coming to a stop.

I never really slept much after that. She Missed had me all messed up. Her friends and family must be sick of that nonsense.

The ride from Klamath Falls to Merrill was pretty easy, but it got interrupted by a breakfast stop at Nibbley's Cafe and Bakery. It's only a few hundred yards off the O&C Line Rail Trail that leads you out of town and I wanted coffee & eggs to jumpstart my system. Good decision, as usual. 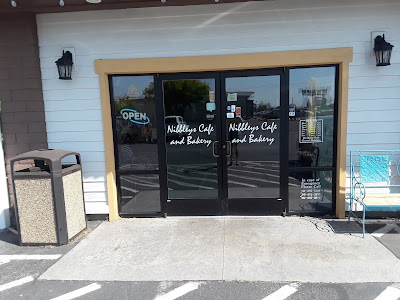 I was pretty fried by the time I finished the ride, not from the route or from the miles, but from the heat. This is flat, high desert with alfalfa farms everywhere you look. They are surrounded by volcanic hills and low peaks. Sooner or later, I will have to do some climbing.

For now, it's time to fix some vittles and get horizontal. I am really happy with my Big Agnes Copper Spur 1 tent and Thermorest Neoair mattress for this kind of camping. Can't wait to sleep hard all night. Wherever She Missed is, she ain't missed! 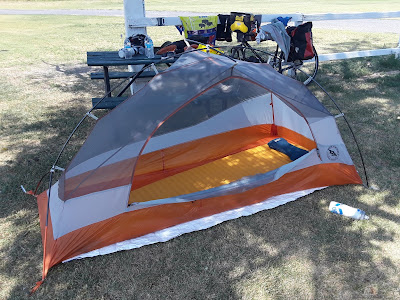 Peace, Love, and On My Way,
Jim
Posted by Palomino at 5:24 PM No comments:

On the eve of my departure for Klamath Falls, I am updating my intended bike trip plans...for the umpteenth time. That map I posted recently? Just a pretty decoration.

The internet is wonderful. If you try, you can learn from other people's mistakes what routes are clogged by tourists experimenting with steering their rented RVs, which ones have hundred-mile stretches without services, and what days you are most likely to get runned-over by logging trucks. I know runned-over isn't proper English, but saying it that way takes some of the sting out of the possibility of actually experiencing it. The Adventure Cycling forum recommends, for example, taking the bus between Chester and Quincy. They don't say runned-over per se, but runned-over is definitely implied.

Anyway, I have been consulting with my old pal Dr. Googlie and I have decided to forego the Crater Lake rim ride for the time being (they close it off to cars and RVs one weekend in September) and to sizzle my way through the Lava Beds National Monument instead, loop around through Lassen Volcanic National Park, take that highly recommended bus to Quincy, and head for Truckee and Lake Tahoe. Maybe. Might change my mind at any moment and chart a new direction if it suits my fancy.

My approximate route from Klamath Falls to Truckee


I hope to stay out for three weeks, keep the mileage way down, eat healthy, see one billion stars, catch up with a couple of old friends, and avoid getting runned-over.

Peace, Love, and Bike Camping,
Jim
Posted by Palomino at 8:17 PM No comments:

When you are an aging retired teacher, taking the advice of your former students is not always a great idea. You are pushing seventy and astonished by all the $^*# that is happening in the world. They are in their twenties and what they are not already experimenting with, they are cheerfully considering. Half the time, you don't know if you should fist bump them or report them to Interpol. But mostly, you remember the times they made you smile and you are happy they are still in occasional contact - even if now they feel a little too comfortable using the F-word around you, like two or three times per sentence.

Recently, however, I picked up a movie recommendation from one of my most trusted young amigos who just got back from a trip to Japan with his family. He is an aficionado on all things Asian, gleaned mostly I think from modern comics and video games, two things about which I know zippo.

He and his friends were posting back and forth on Facebook last week about a movie called Kung Fu Hustle. They were saying that it combined terrific, over-the-top Kung Fu fight scenes with hilarious, irreverent comedy. Well, that was a giant understatement! I watched it on Netflix at a friend's house and I'm still laughing two days later! 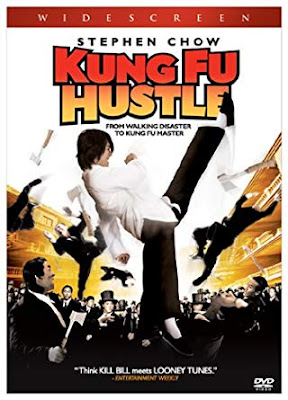 Basically, the story is about a low-level gangster loser who evolves into a Master fighter by virtue of the unlikeliest of circumstances. To say that the narrative has a few holes in it is putting it mildly, but that doesn't matter. The action is bold and screwy and wild and riddled with joke after joke and ridiculously funny sendoffs of every martial arts film stereotype you can imagine - and probably some you would never ever think of. My favorite character is The Landlady, but there are a dozen more just as funny as she is.
There are others, of course, all of whom have some tie to the main bad guy mob called The Axe Gang.


Probably the most important take-away of Kung Fu Hustle is that you never ever want to mess with The Buddhist Palm. Just ask The Beast.

I don't have Netflix at home and it's probably just as well that I don't, but if you subscribe, do yourself a big favor and immerse your funny bone in the perfect gang fight comedy stew that is Kung Fu Hustle. If you love it as much as I do, you might even spring for a set of KFH toys to keep prominently displayed on a shelf for all to see. Spread the word. 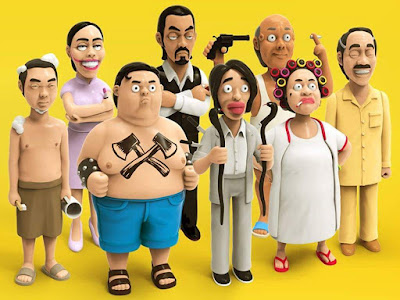 Peace, Love, and I Didn't Even Mention The Tailor,
Jim
Posted by Palomino at 2:19 PM No comments:

After months of rehabbing my rickety trickster of a right knee, I will once again make an attempt at redemption, resurrection, and re-creation. I have an itch that needs a scratch and sitting still just won't do - I need to move. For me, bicycling is much more forgiving than hiking in the mountains with a pack, so most of this effort will be on the sturdy two wheels of my almost-famous workhorse, the Dream Machine.

Initially, I was going to string together a three-month trip with interspersed bus and train rides, eventually to wind up in Tejas for P.S. I Love You's flexibly scheduled birthday celebration. That shindig, from my understanding, occurs on her actual birth date plus or minus a few weeks - sort of a casual, rolling party that kills time in between Labor Day and Thanksgiving. This is a very reasonable approach to what otherwise can be a flash-in-the-pan, one-day ice cream fest. I like it.

However, given the unpredictability of my last couple of adventures, one of which ended with two fractured ribs and the other with a deep bone bruise and a damaged patella tendon, I decided to split things up into parts and see how things will go. So Part A will begin July 30 with a train ride to Chemult, Oregon. From there, I will cruise my bike over to Crater Lake and circumnavigate the Rim Road. I drove around the lake on my first visit in 1985-ish and hiked the west rim on my Pacific Crest Trail trek through Oregon in 2007. But never have I bicycled the rim, something I always intended to do. As we all know, intentions are powerful.

From there, I will try to follow the Sierra Cascades bicycle route between Crater Lake and Truckee, CA. This route parallels (as closely as is practical) the Pacific Crest Trail on roads through southern Oregon and northern California. In addition to testing and improving my conditioning, I will collect data for a writing project for the coming winter - something to keep some of my brain from rotting. Wish me supernaturally good luck, idyllic weather, flat-free safe travels, and no (none, nil, nada) fall-down-and-go-booms.

That will take six weeks or so, by which time I will have figured out how to launch Part B. Suffice to say it will definitely include some form of Tejas-style whoopty-do birthday bash, if not outright California-inspired heathen skulduggery.