I went to see An Inconvenient Sequel: Truth to Power yesterday in Santa Cruz. Pretty ironic, huh. I drove fifty miles round trip to see a movie about man-made climate change and what we can do to stop it. Oops. 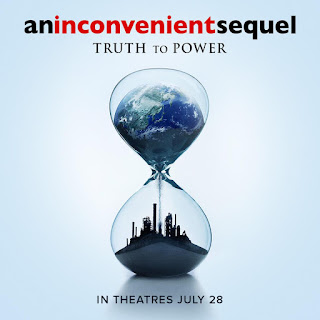 Overall, I liked the movie, even though it inconveniently undid my yoga and made me even more pissed off at my so-called government. I admire Al Gore for sticking to his guns on this issue publicly since 1992. That is starting to be a long time ago. He has not wavered in his passion to bring this message to the world and partially due to his efforts, renewable energy is definitely making a difference worldwide. Look at Iowa. They are kicking major booty with their wind farms. Yes, Iowa. 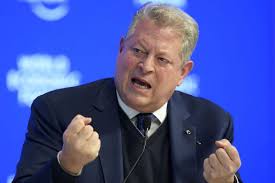 This sequel to An Inconvenient Truth (2006) updates the progressions and regressions in energy policy that have occurred in the last decade while continuing to sound the alarm. The movie begins with a Gore helicopter visit (oops again!) to a glacial field with a research scientist. It clearly shows the melting of the glaciers and the rapid runoff, producing a river of blue in the white expanse of ice. Gore casually tosses around the glaciology term moulin as though the audience would automatically know what that is. I will provide the definition here to save some of you the Google search.

Moulin: a vertical or nearly vertical shaft in a glacier, formed by surface water percolating through a crack in the ice.

All that water going down the shaft is going somewhere, and that somewhere is directly into the ocean. Due to our own ignorance and  greed, we are giving ourselves the moulin, if you get my drift. 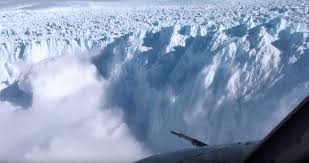 Perhaps the most moving visual of the show, however, is not the melting glacier, but another visit Gore made, this one to Miami, Florida. A bunch of fat white guys, Gore included, are standing around in a street in Miami wearing rubber boots up to their knees. The rubber boots are needed to protect their skinny jeans from the foot-high water flooding the immediate vicinity in downtown Miami.

Where is the water coming from? Three guesses and the first two don't count. Sea level rise is happening now, just as the scientists said it would. Where is that news on Trump-watch TV? It is hardly even mentioned. The rubber-booted engineers are talking about their overwhelmed pumping system as if it just needed a little tweak or two to beat back the Atlantic Freaking Ocean. 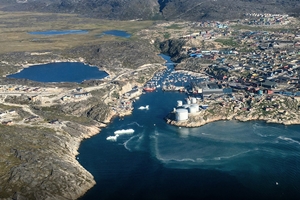 The sequel has less science 'splaining and more specific and moving visual examples of the results of climate change than the original movie. It has a little fewer Al-giving-the-slide-show segments and more world-leaders-negotiating-solutions segments. It emphasizes the international efforts to address the issues and exposes the United States' recent feckless, irresponsible lack of leadership as folly and stupidity. It is very heavy on the Al quotient, though, perhaps too heavy. He says he isn't running for office, but he is definitely reminding everyone that we royally screwed the pooch by letting the damn Supreme Court take away his Presidency. It is hard to argue with that, as history has shown. 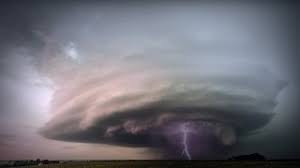 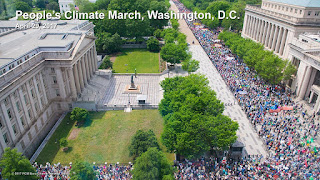 I will read anything by Larry McMurtry. In fact, I thought that I had read everything he has published until I ran into Crazy Horse: A Life (1999). It was tucked back on a shelf in the American Indian research section of the San Benito County Free Library and I grabbed it as soon as I saw it. 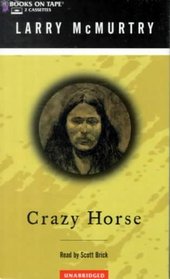 This is a short Penguin book written in McMurtry's factual, but richly descriptive style. He takes you into this biography only as far as he can go without making stuff up. The brief  life story of Crazy Horse, most of which is just plain unknown, is terse and brutally realistic in that McMurtry refuses to dramatize or glorify beyond what can be claimed as true. And, as he repeatedly reminds the reader, it ain't that much. You want to know more, but Crazy Horse just didn't give it up. A lot of this book is dedicated to debunking previous accounts as fairy tales.

Crazy Horse only lived about thirty-five years. Much of what we know about him stems from a vision he had after fasting for a couple of days. He saw a horseman floating above ground. He was told not to decorate himself or to keep anything for himself. In battle, he was to wear a small stone behind his ear and a single feather at most atop his head. He would die when people he knew were holding his arms back in a fight.

He kept to himself almost all the time, but was known, in keeping with his vision, as a man of great charity to those he stayed with on the occasions when he was in camp. He was quite taken with a woman of his tribe (Oglala), but she married another man, someone much more of a homebody. Crazy Horse eventually took a wife who bore his children, but continued his roaming, singular mystic life most of the time.

His early death was as predicted. Always reluctant to compromise or concede to the white man, he was persuaded to come to Fort Robinson in northwest Nebraska for talks. Held back by Little Big Man (the real Little Big Man, not the fictional character), he was pierced through the kidneys with a bayonet by William Gentle and died. His reputation as a giving person who was fiercely independent and strongly opposed to surrendering to United States forces earned Crazy Horse a special place in the history of the Oglala Sioux. In memoriam, his likeness is in the process of being carved into stone in the Black Hills of South Dakota by the Ziolkowski family. 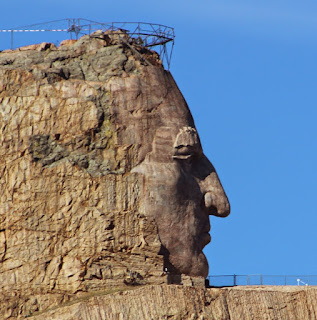