I had good intentions. There are three miles of hiking trails at my local state park that need attention. Winter rains made the oat grass, poison oak, and thistle crowd out the tread in places to the point that it was covered. I knew what to do - get a group together on the summer Solstice and knock that stuff out. 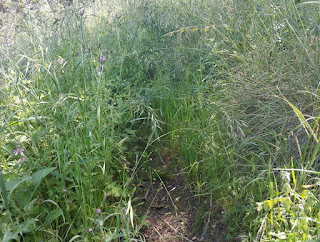 So Wednesday at 7:30 a.m., I was waiting in the parking lot near the Valley View trail head in Fremont Peak State Park just like I said I would be when my friend Mel drove up. Mel would be the only other volunteer to show up that day. I'm 65. Mel is 69. We ain't exactly trail crew summer Solstice/spring chickens. We are both pretty fit as old codgers go, but as we were about to find out, trail work during a heat wave is for kids. 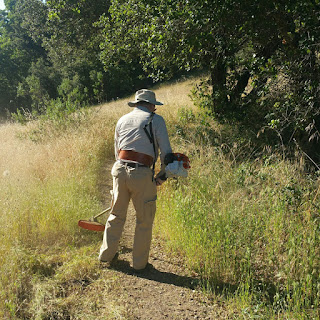 We took turns. One of us would use Mel's plastic-bladed weed eater to slay the brush while the other raked the trail clean and lopped overhanging branches. It didn't take long to get sweat-soaked and a little woozy. That kind of work is different from my usual walking or bicycling or calisthenics. There is a different stress level and it's noisy. You use different muscle groups. Old muscle groups. Possibly lost muscle groups. By ten o'clock, we had cleared about an eighth of a mile of Carmen's Trail and we were toast. Very soggy toast. You gotta know when to fold 'em and that's just what we did. 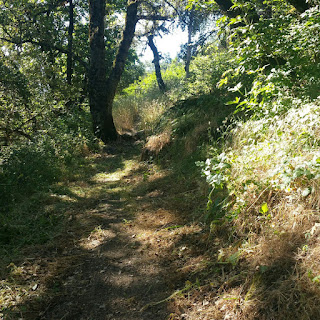 The newly cleared part of the trail looks really nice if I do say so myself, but to finish the job, I'm going to need more bodies (younger bodies!), more tools, and hopefully, a brush cutter like this one. 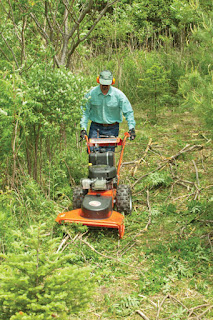 So next week I will try try try again, and eventually, I will get this sucker done.

If you want to keep up with my "Walking San Benito" series on BenitoLink, the fifth article came out today. They can all be found on the "Features" page. Click here.

Peace, Love, and Pace Yourself,
Jim

Here in my town of <1,800 people, opportunities to hear mind-expanding speakers from other countries are infrequent at best. Last Saturday, though, was different. At the San Juan Bautista Public Library, aka the Luck Library, named after a generous donor and historic resident, a man and his wife visiting from Cuba came to tell us their story. 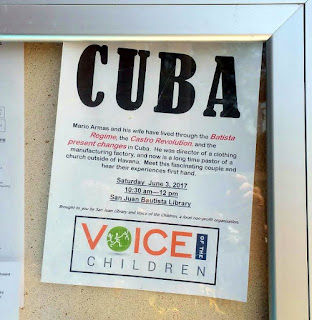 Mario Armas and his wife (I did not hear her name) are in their early eighties, having lived through years of poverty and restrictions imposed by the Batista and Castro regimes. In Spanish, they spoke of their experiences through Marcia, a local resident translator from the non-profit foundation Voices of the Children.

Following an introduction and some beautiful Latin music played by a skilled trumpet soloist, Mario described his early life as a musician and a director of a clothing factory as mostly successful. After the revolution, though, times were harder. The Soviet Union provided some resources and services, but mainly those things went to the political leaders, not to the common people. While all these changes were occurring, Mario became dissatisfied with his life and began searching for meaning. He converted to Christianity when he was fifty-three and devoted himself to building a modest church and serving as the pastor of  his village's congregation of about 1,500 worshipers. 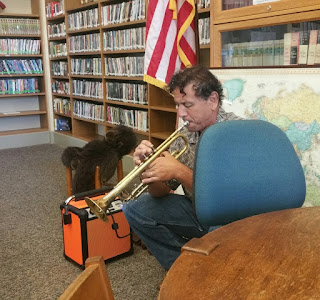 Under Castro, education was free all the way through University and literacy rose to 100%, but that did not translate to economic prosperity. Opportunities for women in the work force were comparable to those of men - which is to say pretty dismal. The average wage was and is $11 per month plus a monthly food booklet used to stand in line for staples like beans and rice and bread. Health care was and is free, except for prescriptions, which were and are generally affordable. After years of school, the salary for doctors and other professionals climb to $15 per month. Try to wrap your head around those numbers.

How do they survive? Many people have relatives who managed to escape to America by boat and find work. Money sent from abroad helps families meet their needs. Ever since the collapse of the Soviet Union, conditions for the average person have grown even worse, although with the death of Fidel Castro has come a slight lifting of some of the more restrictive economic burdens.

Getting by consumes everyone's time in Cuba. For this couple, their renewed faith has helped them overcome these challenges and establish deep bonds in their community. They became acquainted with Voices of the Children through their missionary work and obtained permission to travel here as a result of that connection. They expressed their amazement at the great bounty in the farm fields surrounding San Juan Bautista. The amount of resources and variety of merchandise in America are admittedly a little overwhelming. Listening to their impressions of San Juan Valley reminded me of how lucky we are to live here. It was a little bit embarrassing to tell the truth.

I found these peaceful, kind people to be refreshingly honest and interesting. I didn't get very good photos, but that's Mario on the left at the head of the table. 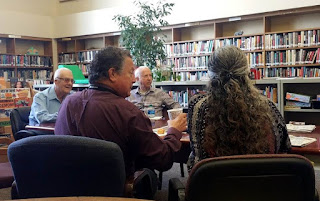 This unexpectedly riveting Saturday morning library program was sobering, inspiring, and humbling. I am so glad I went.

Peace and Love from the Land of Plenty,
Jim

Voices of the Children works world-wide to advance the lives of young people. From their web site:


OUR STORY
We believe everyone should have a platform for self-expression.  All youth should have access to resources that develop creativity while bridging cultures.  Our goal is to empower future generations to realize a voice is a powerful tool for creating change in the local and global community.  Connections through the arts can tear down walls, encourage tolerance and foster cultural understanding.

Voices of the Children is a registered nonprofit, 501(c)(3) organization based in the United States.
​#respectfullycoexist
Posted by Palomino at 12:08 PM No comments: