About 25 miles west of my humble camp sits tiny Moss Landing, CA, a simple village in the center of Monterey Bay's crescent-shaped dent in the central California coastline. Directly offshore is the famed Monterey submarine canyon, deeper than the Grand Canyon, but underwater. In the diagram below,  the mouth of the canyon (the shallow end) points right at Moss Landing. 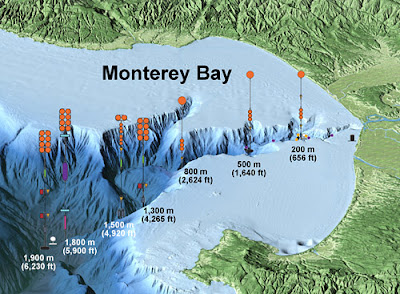 I like to go to Moss Landing State Beach to walk along the sand dunes and contemplate some or none of life's conundrums. Once in a while I spot a whale or two, frequently I see harbor seals and sea otters, and every time there are more pelicans, seagulls, and snowy plovers than I count. I love this place.

Yesterday, I met my walking pal Captain Chem for lunch on the harbor at a new restaurant owned by my friends Veronica and Bruce from San Juan Bautista. Called the Pacific House, it is perched just opposite the entrance into the harbor at 2420 Highway 1, with great views of the water and the dunes that form a protective jetty for sailboats and kayaks. Sea otters pretty much rule the waterway, but gulls pester them for treats when they surface with snacks on their chests. That must get to be annoying. The lunch menu is affordable and varied. I tried the catch of the day fried up as fish and chips while Mike opted for a Calimari sandwich. An overall pleasant experience and I will definitely return. 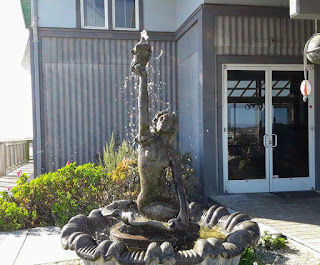 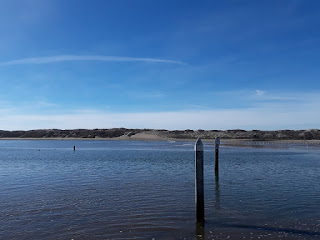 Poor ole Captain Chem is still recovering from a mishap with a step ladder and had to hustle over to his physical therapy appointment. I took a little solo stroll around the harbor to stretch my legs and get the full fresh sea air treatment. The dunes were looking good, as were the boats, the gulls, and a few shy otters. 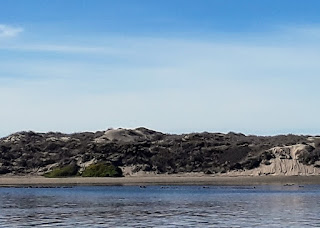 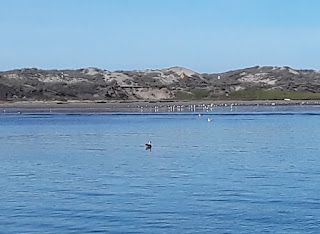 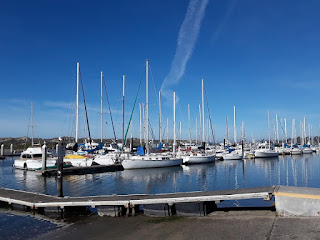 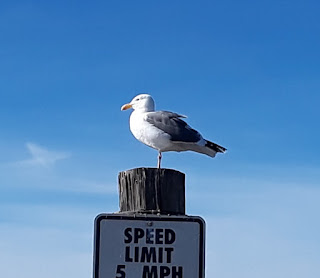 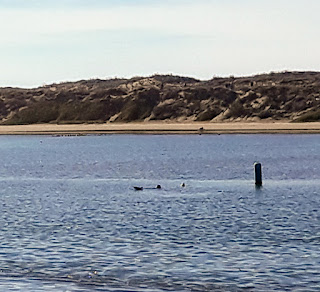 The Monterey Bay Aquarium Research Institute (MBARI) is just south of this location, also in Moss Landing. Once or twice every year they have an open house event for the public to see what critters they are working with and to visit the submarine explorer vessels. That is one of my favorite things to do here. If I had the chance to do it all over again, I would extend my education one more step to earn a doctorate in Oceanography and try to work at a place like MBARI. It completely fascinates me. Maybe in the next  life! 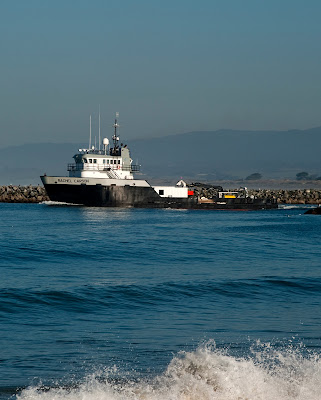 Maybe I will bring the real Rachel Carson back with me to coach me up.

Peace, Love, and the Pacific,
Jim

I will skip the part where my Dad died that July because, well, I am still not over it. Sometimes I think I am over it, but not really. Wakes and funerals and kitchens full of well wishers' leftovers still make me sick to my stomach. I was eleven going on twelve, getting ready to go into sixth grade at St. Monica School in Dallas, Texas. It was like a bomb went off in my heart. Dallas, Texas. I hate that place. I will always hate that place.

Shortly after that, right about when school started, the father of my sister's best friend died. She had a little sister who was in my grade, but I hardly knew her. I would never get to know her. We were tragic, walking zombie-kids. Shocked to the quick.

I had a cool "lay" homeroom teacher, Miss Chiles (not a nun), who liked me and tried to cheer me up every day. She rubbed the back of my crew cut head when she passed down the aisle and nicknamed me "Minkhead." The other kids stared at me and at the little-sister girl with kids-whose-Dads-died stares, with sad, uncomprehending, that-must-suck stares. I just sat there, a desk-trapped, crew cut, tragic zombie.

Then November 22 came along. It was an exciting day. In every classroom, somebody brought a portable black-and-white TV to put on the teacher desk. President Kennedy, the Catholic president, was arriving at Love Field in the morning. We got to watch him and Mrs. Kennedy get off the plane and shake hands with the crowd. One of the girls in our class was there with her family. Her parents let her skip school that day so she could see the President in person. That was cool, really special. We tried to spot her in the crowd, but we didn't see her. Then it was back to business - reading, writing, and arithmetic until lunch time. After lunch, the teachers were going to turn the TVs back on so we could watch the motorcade.

The boys were playing an empty-headed touch football game on the playground when the rumors started buzzing. Some girls came up and said the President had been shot. It didn't seem real. Nobody really even believed it and some of the kids started making jokes, like "yeah Jackie shot him, she was mad and pulled a gun out from her purse and blasted him good." Everybody laughed it off.

But teachers were everywhere all of a sudden. White as sheets. Nuns in black, as grave as caskets. We all lined up and filed inside in silence. We sat in our desks in our English teacher's room. We didn't know it then, but later we found out she was the one who played the big fat prostitute in The Last Picture Show. The TV was on. The President was dead. 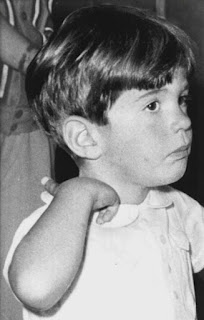 The whole school went into solemn, grevious lockdown. Circle the wagons. All those doomsday drills, walking out into the hallway and lining up against the wall and crouching down with our arms over our heads, none of that prepared us for the black cloud of pure evil that settled into our lives that afternoon.

They herded us into the church and mobilized the priests and altar boys with incense and gravitas. We prayed the rosary over and over. Loudly. Together. Eight grades of kids, four full classes per grade, fifty kids per class, an army of baby boomers and their teachers booming Our Fathers, Hail Mary's, Glory Be's - soul weapons against the madness. Crying parents trickled in, joining in on the ringing, sorrowful wails. What the bleeding hell.

At home, Dad was so not there. The rest of us, the remainders of us, the sad, scattered, exploded bits of us, sat and watched the TV. Over and over. This awful, putrid stuff actually happened mere miles away. It felt like if you opened the door to the house, the shots would still be echoing, the gun smoke would swarm onto your clothing, the President's blood, the buoyant, handsome, Catholic President's blood, would be there, flowing slowly down the street.

Time crept by and we were still watching the TV, over and over, a day or two (a month or two?) later, Oswald was in the station and we watched it live, I'm pretty sure we watched it live, as Ruby just walked up and shot him, the wincing, handcuffed idiot, in the stomach. Just like that, our lives were ruined all over again.

1963. There is no limit to its sadness. Innocence sterilized.