For just the second time since Rona overtook my senses, I buzzed over to Moss Landing for a beach walk on Monday. The sky was overcast and gray, but I did not even care. It was wonderfully uncrowded and pretty clean overall, two things that increased the fun.

I kind of knew it was going to be a good visit. All the way there, the little things added up - green lights, easy traffic, a serendipitous clear space when I needed to left-turn on Jetty Road off Highway One - I barely had to stop the whole way from home to the dunes.

And then, after walking maybe a mile along the low-tide surf, I happened upon a rare little treasure - three unblemished sand dollars just sitting there waiting for me to say hello. I did not touch or move them - just took a picture and smiled. Leave No Trace.

Like I said, it was low tide so the surf wasn't super-great and everything was a muted grayish color, but still, walking with the Pacific as  your partner is always special.

I tried and failed to make a California surf movie with my phone. Sorry. I called Blake Lively's people to see if she was available. Evidently, though, she has been pumping out babies like a 1950's Vatican-approved, Hoover-vacuum, Swanson's-TV-dinner house-mom and can no longer fit into her sexy wet suit. So this is the best I could come up with for now.

Once again, just like last time, there were no pelicans. Bummer. But the gulls, the curlews, and the snowy plovers did their best to amuse me. This gull appeared to be lecturing a class of snowy plovers on how Earth's ocean tides work. You might think the plovers are too close together for safe schooling, but if your were to measure a plover's foot and times it by six, you would probably see that they achieved pretty good social distancing. With the hardy on-shore wind, masks were not really practical or necessary.

Another gull and a curlew had a brief standoff over who had the rights to a tiny brown sand crab. The curlew, who had filched the crab from the sand with his or her long curved beak, prevailed. But shortly thereafter, another curlew showed up and bullied the harried crab away from him or her. Rough day at the office.

Most of the time curlews are fairly peaceful, hard-working, sociable creatures. They seem to get along quite well, as in the photo below. Basically, they just want to eat, make babies, and not get munched by coyote.

Toward the end of my walk, I found a bunch of clams hap-hazardously arranged on the sand in juxtaposition to a picked-clean sun-bleached fish bone. Make up your own caption. Whatever you come up with, it definitely won't favor the fish.

All that was left to do after a couple of hours was to climb back over the dunes and head back to Spugly. I took one more long look at the kind of meager break and thanked the nonetheless mighty Pacific for soothing my COVID-ragged nerves.

Peace, Love, and That Sound a Wave Break Makes on the Sand,
Jim

Looks like I might have to wait 6,800 years to see NEOWISE the comet. Do you think Social Security will last that long?

I rumbled up San Juan Canyon a few miles last night before sunset to a roadside turnout with a decent view of the northwest sky, facing Polaris. I could easily see the horizon rising  to cover up El Sol from the same spot.

Judging from the presence of the significant marine layer coming in from the coast to cover up the lowlands, I was a little dubious that the comet would be visible from my little perch. The rolling fog monster is quite normal for my neck of the woods, especially this time of year. It's a good thing, keeping our evening and morning temperatures cool and bringing much needed moisture to the trees. But for comet viewing? Not so ideal.

I stayed through the sunset, having read on the Weird World Web that just after sundown was the optimal comet-catching time. 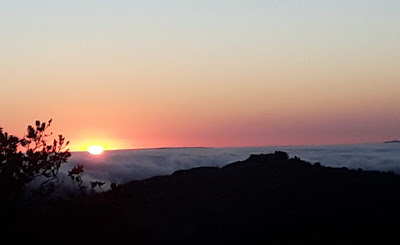 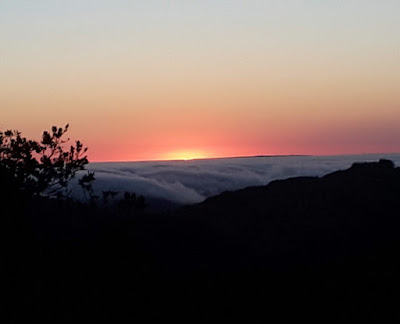 Even though I didn't get glimpse one of NEOWISE, I am glad I took the time to wind my way up the canyon to try. It was a calm, peaceful way to end the day. Normally, I am getting ready for bed right about then, so it was kind of an adventure in itself to be upright and alert enough to drive.

By the time I got back to camp, it was after 9 and dark. Some Dude on the Web was now saying the best time to see the comet was between 10:00 and 10:15 p.m. in the northwest sky, just below Polaris. Well, what do you know? Maybe there was still a chance.

So I jumped back into Spugly and chugged around the corner by my friend Armando's ranchito to see if I could get a look from there. He usually has a nice clear view of the sunset from his property, unlike my camp which is surrounded by tall redwoods. But all I could see was dark sky and black clumpy fog rolling over the hills. No Moon. No Sun. No Polaris. No NEOWISE.

I do not have photographic evidence of that, so use your imagination.

I am now more motivated than ever to eat right, exercise, and avoid crowds of virus-spewing drunkards. I may have to tough it out here in San Juan Bautista for another 6,800 SIP years.

Peace, Love, and Cost of Living Adjustments,
Jim
Posted by Palomino at 10:23 AM No comments: