Birdman on The Farm

Drawing inspiration from brother John's recent photo essay Birds of the Texas Snowpocalypse, I used a little of my stimmy to purchase a three-pound bag of wild bird seed this week. I wanted to see if the Steller's Jay that nests in one of the redwoods in my camp might be interested in a little government-sponsored food distribution. I did not, however, purchase any sort of bird feeder. I simply cut open a corner of the plastic bag holding the wild bird seed and shook out a few handfuls on the gravel pad next to my redneck deck. Then I went inside and observed.

To my surprise, said Steller's Jay did not show up to investigate right away. Instead, a flock of migratory Northern Shrikes, aggressive little warblers with stubby seed cracking beaks, moved right in like they knew in advance of my experiment. I had not seen a Northern Shrike around here since last winter, but apparently they were keeping tabs on me.

They were all over that wild bird seed, in groups of 3-10, hopping, scratching, pecking, and eating, sometimes messing with each other, then fooooop, instantly en masse retreating up into the trees at the first sign of an intruder. Then, when the coast was clear, they swiftly and silently reappeared on the gravel pad for further furtive feeding. They are fun to watch, even though they are nowhere near as personable as my Steller's Jay.

Today I tried to take pictures and videos of them through my window with my Smartyphone. The results were pretty dismal, but those nervous little shrikes would not stick around when I tried in vain to step outside to get a bit closer. 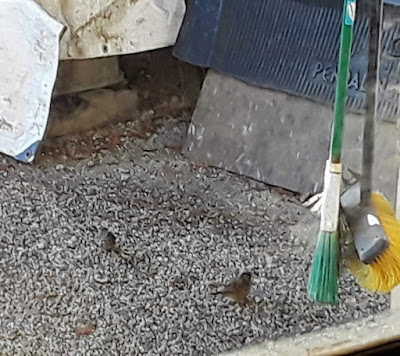 As for the video, it was equally dismal, plus I don't know how to upload it to this blog. I will try this brute force experimental method to see if it works. Click on Shrike Spy Cam.
Anyway, oh well, you will have to take my word for it. It is really fun to watch shrikes feed. Out of nowhere, today a California Towhee showed up. It was bigger and burlier that the shrikes, but totally on its own, and there were no fights for territory or seed. It looked like it was trying to fit in with the flock even though it was big, fat, and clumsy in comparison. Then the Steller's Jay came by and everybody split while he took his brief turn at the feast. He acted like he just wanted to see if he could get away with chasing the shrikes and the towhee away. I think maybe he's mainly a meat-eater. When he had succeeded in dispersing the flock, he ate a little and left, presumably to hunt for worms and bugs. Later, a belligerent blue jay did the same thing.
I like this bird feeding thing, I'll keep doing it until it stops being fun.
My renegade implant saga is on hold, in case you were wondering. The hole in my head is healing nicely and down the road I will get a scan to see if the bone has regenerated or whatever you call it. My good ear was bothering me so I went to see Dr. J, an Ear Nose and Throat surgeon. He listened to my story, then peered inside my ear hole with his peering tool. He didn't think I had anything too serious beyond some blockage so he pulled out his anti-blockage tool and excavated an amazing amount of reddish brown gunk from my ear hole. It came out in a couple of dozen small chips and flakes about half the the size of a piece of oatmeal.
Soon, though, he bumped up into a tool-resistant mass of ear gunk and the weirdest thing happened. Every time his tool touched the gunk/pebble, I flinched and coughed involuntarily. It just happened on its own instantly, like an electric shock. I thought that electric shock flinching/coughing should not be a normal reaction to ear hole cleaning, but Dr. J assured me it was. He was just about to give up and I was growing weary of the flinch-coughing when he adjusted my position, straddled the side of the chair, grunted, and said, "Ha!" Then he showed me a raisin-sized hunk of ugly ear gunk stuck on the tip of his anti-blockage tool. It seemed to me to be quite a gargantuan thing to be residing in my ear hole and I was glad it was gone.
Almost immediately I noticed a significant improvement in hearing in that ear and a reduction in the fullness in my sinuses. A happy excavation it was.
On Friday, I will return to Dr. J's offices to get a hearing test. The idea is to establish a baseline in case my good ear begins to deteriorate for real. The left ear is still dead, of course, and he said there wasn't any way to make it work, which I already knew.
In the meantime, I will continue with my exercise plan, rest while watching the birds feast on seeds, and wait to get my call for the magic COVID vaccine. Supposedly, they are on the 73 year old group in my county right now, so it shouldn't be too much longer.
Peace, Love, and I Need to Learn Video Skills,
Jim
Posted by Palomino at 10:14 PM No comments: 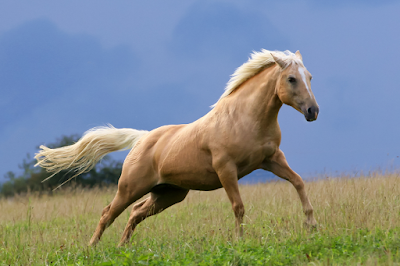 Palomino is out of the barn as of this morning at 9:20. Wahoo!

Doctor O examined the hole where two faulty objects once called home (Tooth Number Three and Implant Number One). He said it was still a little swollen but it was healing nicely. Chalk that up to all that early childhood training at following directions, thanks Mom and Dad (spare the rod, spoil retirement). The sutures will come out next Monday, then I will wait 4-6 months for the bone to heal itself and hopefully seal off my sinuses. A scan of some sort (ICAT?) will tell the tale. I can wait.

Meanwhile, I can start to eat regular food if I'm careful and if I chew only on the good side. This is good news. I was getting a little bit tired of soup, oatmeal, applesauce, and scrambled eggs. And, thank the Holy Cosmic Muffin, I can return to my walking/biking/calisthenics habit as long as I take it easy for another week or two. This puts my 2021/1202 Challenge in jeopardy but who really cares about that anyway?