That's All He Wrote

Yesterday was my last day as a Caltrans Adopt-a-Highway volunteer. After eleven years of picking up trash on Highway 156 each month, I am hanging up my grabber, turning in my hardhat, retiring my dayglow orange-yellow safety vest. Someone else will have to clean up after the pig people.

I am not quitting because of any particular reason other than I am tired of doing it and my bad knee balks at skidding down the steepish roadside slopes into the drainage ditches to retrieve thousands of exploded pieces of Styrofoam or the occasional wayward tangled up deflated Mylar balloon or a heaved poop-filled diaper. What kind of Mom heaves a poop-filled diaper out the car window? If you need to assign blame on my exit from the ranks of highway angels, finger idiots like her. I have done my service to the San Juan Bautista community many times over. Now is the time for the next generation to step up.

These years were not without fun. Every once in a while, friends like Captain Chem or Commander Cody or Chiquita Anita would pitch in to help. Sometimes there were monetary rewards. Once I found half of a a 20-dollar bill sticking up out of the dirt. I dusted it off and checked to see if the serial number was intact. It was complete so I mailed it to the Department of Treasury in Washington, D.C. with a note saying where and how I found it. Sure enough, about three months later, a brand spankin' new, crispy Andrew Jackson arrived in my mailbox. Andrew Jackson was an a$$hole, but he paid for breakfast that day.

Then there was this story, the day I had to pick up all kinds of panty liners on Highway 101.

But this one just might be the best roadside toy tale in history.

I told, via  Facebook post, the local citizenry of my decision to retire and asked nicely if there might be a person or group of persons who might like to replace me. The responses were lukewarm in terms of volunteers, but there were many grateful and sincere words of thanks and praise for my years-long efforts. I appreciated that and to them and to all of America, I say, "You are welcome."

Posted by Palomino at 8:34 AM No comments:

A rare overnight rainfall Monday night gave way to a cool, crisp, sunny Tuesday morning in Moss Landing, CA, which is, as the crow flies, or as Hondo scoots, the closest beach to my camp. I met Captain Chem for a post-birthday breakfast and beach walk. Captain Chem, ever the alert and literate blog reader, almost immediately asked me how old I was. To which I replied:

The grin on his face revealed his sly attempt to catch me in a septuagenerian error, but I was onto him. I am finished with being 70 period.

The Moss Landing Cafe was first choice for vittles, but they are closed on Tuesdays, so we took a chance on the satellite-eatery, over-the-bridge version of Phil's Fish Market. It's kind of rudimentary, but it will do in a hungry pinch and the people there are super-nice. It has both indoor and outdoor seating.

Parked in front of of the market/eatery/convenience store was a funky cruiser bicycle which, as I later discovered, belongs to a local character known as Pirate Don. Sadly, Pirate Don was nowhere to be found on Tuesday, but if you see him, tell him I like his ride. Except for the saddle. I do not think that saddle would be comfortable. 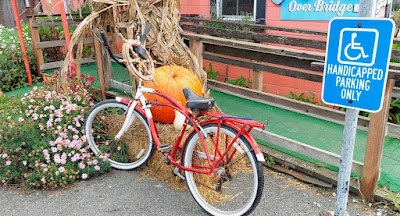 The greatest things (aside from the Pacifc Ocean and the sand dunes) about Moss Landing State Beach are twofold: 1) you can walk for a long way between the jetty and the Pajaro River and back and 2) it is rarely crowded during the week in the waning days of autumn.

The scenery and relative isolation are conducive to purposeful striding and stream-of-consciousness world-problem-solving. Some Palomino-Captain Chem conversations are quite brilliant if I do say so myself, and alternatingly funny as hell. Maybe we should start taping these hiking wisdom nuggets for broadcast or podcast or outcast podcast or something. When the good Captain completes his 70th year in 2023 I think it is, if there is still such a thing as the Internet, we can begin to share with the world the many ways they can get their sh*t together. The Septuagenarians might stream all the way to Netflix.

One way that people could improve things is to knock off the whole oops-I-killed-a-porpoise-when-fishing-for-ling-cod nonsense. I think they call these accidents "bycatch."  Here is a definition of bycatch from Merriam-Webster:

Okay, okay, it happens, they didn't mean to do it (key word mean), but my questions are: how and why did this poor critter get sawed so perfectly in half? Just to freak out septuagenarian beachcombers? The vultures and gulls will gladly, or at least efficiently, take care of it, I suppose.

Speaking of birds, there were planty of snowy plovers, curlews, gulls, pelicans, and yes, a few wary, but persistent vultures at the beach. They make a very good living from Monterey Bay and I don't believe they ever kill anything unintentionally.

Peace, Love, and Be More Careful,

The Sixties Are Over

Well, the sixties are finally over. On Sunday, December 5, at 7:51 a.m. Pacific Standard Time, I will complete my 70th year as an ethereal spirit masquerading as James Raymond Ostdick in this rapidly aging bag of bones. From then until next December, I am supposed to say I am 70 years old, even though as every second goes by I will actually be living out my 71st year.

Whenever I have this conversation with people, no one seems very bothered by our custom of understating our ages when asked. Saying I am 70 is not very precise. While it is true that I have lived 70 years, it is also true that I have lived 66 years, or 68. I may as well pick any other round number reasonably close to the way I look (as long as it is not over 70) if I want to abide by societal norms.

However, I feel rather adamant that, to be forthright, I should admit that the sixties are over and done with. On this final day of my 70th year, I vow that I'm not going to say, if asked, that I am 69. The sixties have been over for quite some time now. Tomorrow, if asked after 7:51 a.m. PST,  "How old are you, Jim?" I am going to say, "I am in my 71st year, thank you very much."

It was chilly when I got up so I hustled over to the Mission Cafe to treat myself to a pre-birthday omelet. I wanted to take one more 70th-year hike at Fremont Peak State Park, so I was going to need some righteous sustenance. Just like I knew it would be, the omelet was both righteous and delicious.
Imagine my surprise when I was ready to leave, all fired up by eggs and coffee, and my pretend Mission Cafe granddaughters/waitresses Maria and Jessica announced that my meal was on them. They were all smiles and happy birthday tomorrow wishes as I fished out some bills to leave them a tip anyway. Very cool way to start the day. I made a mental note that if I should happen to win Superlotto this evening, I will definitely buy each one of them a brand new car. Pretend Grandpa is righteous, too.
On the way up San Juan Canyon to the park, I stopped at an overlook to check out the view down into San Juan Valley. This is one of my favorite things to do when things are socked in down below.
Up in the park it was sunny and warm and I had the place to myself. There are about six miles of hiking trails. I chose to do the loop starting from the upper parking lot: the Valley View Trail to the Cold Springs Trail to Tony's Trail to Carmen's Trail back to the beginning. Took me about two hours, which is slower than I could do it even a few years ago, but who really cares? It was fun! The trails took me through madrone and oak forests with lots of moss and lichen. It was odd not to see any mushrooms or deer, although I did see plenty of deer tracks and scat. The trails, by the way, are in great shape right now. 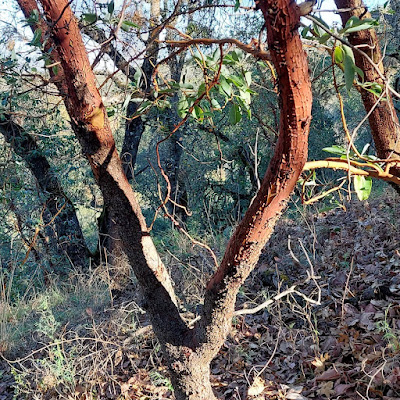 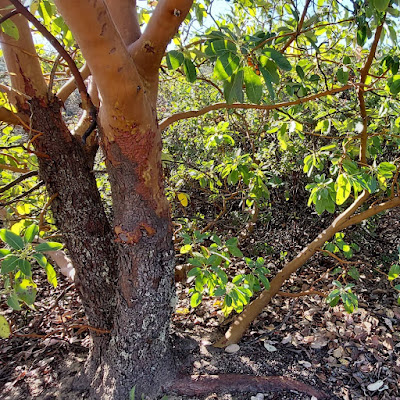 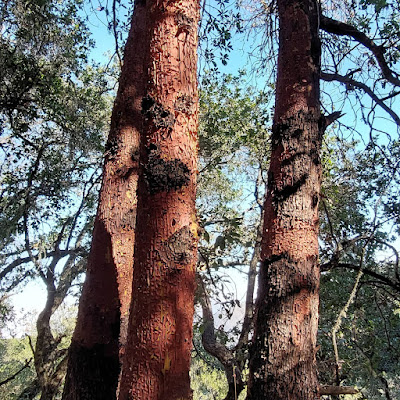 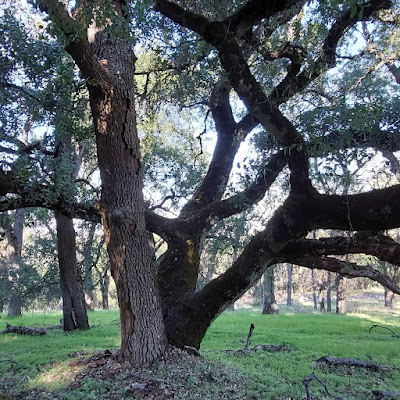 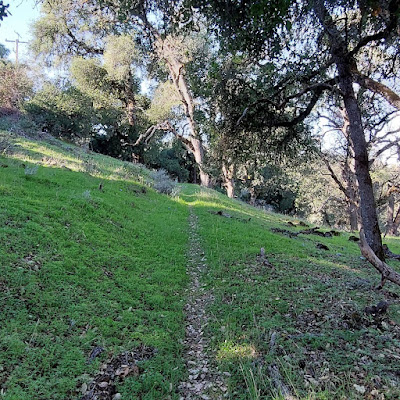 On Carmen's Trail there was a lot of furry moss on the trees and rocks and many windblown pieces of what I am calling lichen. There is a good chance that's not correct. It's some kind of parasite anyway. 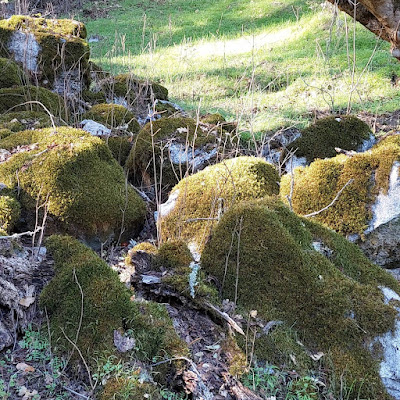 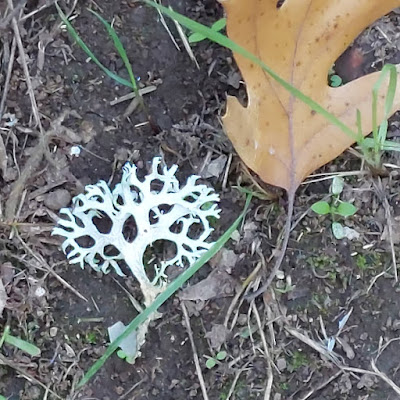 .
I feel really good after today's hike, my last walk of what people call my sixties. As long as I can keep doing this kind of thing, I'll be a happy camper.
Peace, Love, and Oh Boy, I'm on My Way to Get a Giant Smoothie at Bliss Blendz,
Jim
Posted by Palomino at 3:30 PM No comments: