I know what you are thinking. You are thinking that word up there in the title of this post sure is funny. You might also be wondering exactly how do you say that funny word, so my job, which I take very seriously, is to straighten this thing out.

First of all, let's rule out a few common mispronunciations. It is not "ooo-moon-hoom." Nor is it "you-moo-noom." It is not 'human-hum." Nor is it "um'n-hum" (although that's pretty close).

Making this humming sound would be very apropos, seeing as how Umunhum is the Amah Mutsun tribal word to describe the (sacred to them) hummingbird. Who doesn't love a hummingbird? The Amah Mutsun were among the seventy or so tribes of the Ohlone people who lived along the coast and in the region now called Silicon Valley in northern California from about 8,000 B.C. (maybe even earlier than that) right up until the insanity hit the fan in the 1770s.

Mt. Umunhum rises above these places just south of the town of Los Gatos. The insanity left its mark on this beautiful mountain in the form of an ugly grey concrete block which was once the base of a radar tower during the Cold War from 1957 to 1980. The tower was part of the nationwide Semi-Automatic Ground Environment (SAGE) defense system which was designed to alert fourth graders that they were about to be incinerated any minute now. I guess it worked?

There is still a lot of insanity, of course, but yesterday, I and my erstwhile hiking brother Captain Chem escaped most of it by hiking to the summit of Mt. Umunhum from the Bald Mountain trail head in the Sierra Azul Open Space Preserve. There was a thick fog down in the sprawling Silicon Valley wasteland, but the view from above was absolutely exquisite. 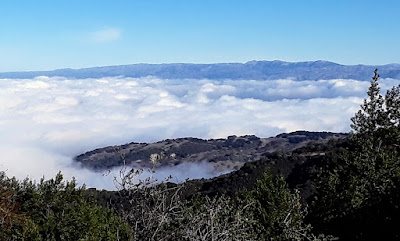 Great effort and dinero has been expended in the last couple of years to clean up much of the damage done to the mountain by our balley-hooed  military industrial complex. A lot of the junk has been replaced by beautifully landscaped access to the summit both from the trail and from Mt. Umunhum Road. Our trail up to the summit ended at the parking area. From there, we climbed the 159 stairs the rest of the way to the eerie concrete block. A gazebo-like shelter sits at its base, housing a set of poster displays documenting the history of the mountain and maps identifying the surrounding peaks. There are remarkably striking solid oak benches from which to soak in the 360-degree views, plus a circular central ceremony ring for Amah Mutsun and others to hold court. 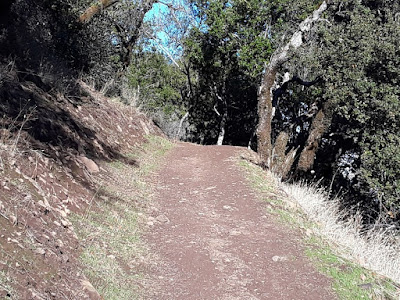 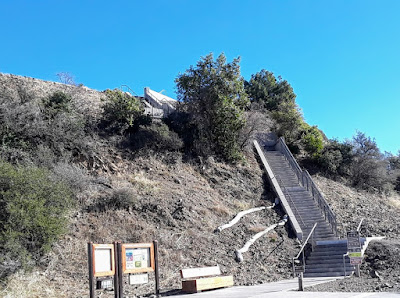 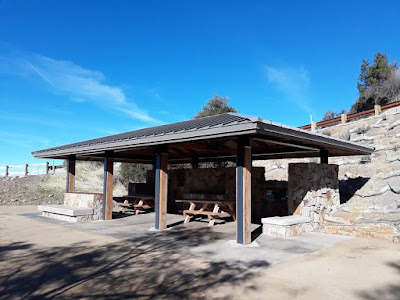 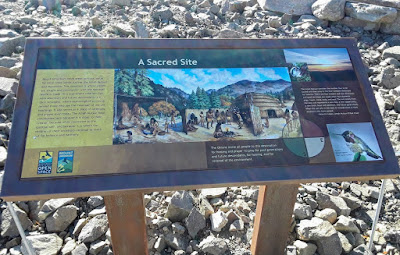 Sanity is making a comeback in the Bay Area. It has a long way to go, but on Mt. Umunhum, you can feel it. It never left. It is standing its ground.

Peace, Love, and Viewpoint,
Jim
Posted by Palomino at 9:50 AM