The cool morning fog had nearly lifted by the time I exited Hwy 101 and headed south on Hollister Avenue into Goleta CA. Goleta is a suburb of Santa Barbara, a sprawl that includes Isla Vista and UCSB.

I was starved due to the previous night's grab bag dinner, so I pulled into the first strip mall shopping center on my side of the road and started scouting for breakfast. Dismounting, I pushed the Dream Machine along a crowded row of businesses. Sushi. Subway. Phone store. Beauty salon.

Just as I was approaching the salon, with its neon signs flashing "Nails" and "Waxes" and "Tints," the door popped open and out came Little Miss Perfect, Santa Barbie herself.

This early 20s girl was just the right height, just the right shape, < 5% body fat, tanned, toned, waxed tantalizingly bare except for her shining straight brown just right shoulder length perfectly trimmed model hair, color-matched, with upper and lower nails perfectly formed to easily slip into expensive slithery garments. She probably had perfect teeth, but I couldn't tell you that because she didn't show them to me.

She smelled really good. Her battery operated green eyes, though, were avoidance tools, focused on some plane unattainable to those mere mortals who poop and pee.

As she passed - glided - in front of me, her perfect little nose wrinkled slightly, disapprovingly, as if to announce "eww, it sweats" not to me personally but to me as part of that general population of beasts that are not shaped, waxed, toned, trimmed, polished, and related to hedge fund managers.

She disappeared and I continued, suddenly a lot more interested in the Cajun Kitchen Cafe and breakfast. I, as you know, heart breakfast.

Santa Barbie Land was, is, and ever will be jampacked full of Santa Barbies. They wiggle and sashay out of the woodwork. I must say I enjoy their presence in an oh-my-the-scenery-here-in-Santa Barbie Land-is-most-delightful way. At my age and in my perpetual state of exercise-induced revery, the Barbies are lovely in the same way as the carefully tended landscapes and viewscapes in Santa Barbie Land parks.

The trees and flowers in Alice Keck Park, for example, are particularly compelling. Trees there are immense and stretch their long, thick, leafy branches high into the Barbie blue sky, seemingly begging to be climbed, the better to see the brown mountain backdrops and the shining blue peaceful ocean.

It's important, however, to keep these sceneries straight. If a stinky old coot like me were to park his bike beneath a sycamore and climb upon it, most likely no one would pay me any mind. If, on the other hand, I became careless and happened to proceed to climb upon a Santa Barbie Land Barbie, mass panic would ensue. I would be instantly arrested, handcuffed, straight-jacketed, shot full of thorazine, tossed in a paddy wagon, and driven to the County line, to be dumped in a ditch and abandoned.

Honestly, that happens all the time. You've seen those old southern California guys sitting on the side if the road, staring, with grass in their hair. If I weren't so accomplished in the art of scenery compartmentation, there might be I.

Besides tree-and-girl watching, while in Santa Barbie Land this week I sought self-improvement at the Santa Barbie Museum of Art. The museum featured an exhibit of Italian paintings, including some by Santor Botticelli. He lived and painted in the late 1400s and is famous for his amazing likenesses of Muvva Mary and the baby Hay-zoo and cherubs and classical-style Barbies. Back in the day, Barbies were allowed to be somewhat chubbier, judging from Santor's work.

Probably his most famous painting is "The Birth of Venus," possibly the definitive Barbie of her time. But something happened to Botticelli's classic treasure upon arrival in Santa Barbie Land. Evidently, there was a snafu at the Santa Barbie Museum of Art. Where Santor's painting should have hung, three modern versions took its place. I have included them for your viewing pleasure below, for your self-indulgent, self-promoting, self-serving, self-improvement pleasure.

Remember, they are just part of the scenery. If you find them offensive in any way, just wrinkle your perfect little nose. After all, when in Santa Barbie Land, do as Barbies do. 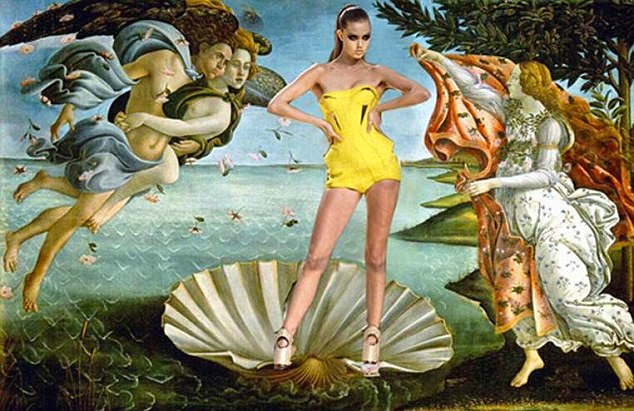 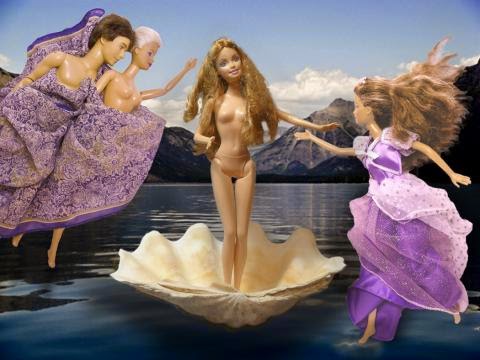